The bay is awash in rumor of what lies beneath, from visions of Jaws to leftovers of failed prison escapees. But what's really down there, and what are you swimming over, around, and in?

Buckle up. We're going to take a thrill ride through the bay's fascinating, hilarious, and sometimes macabre facets.

1. The bay really IS full of sharks... just not THAT kind of shark.

You pictured Jaws, didn't you? Look at these chubby-mouthed noodly sharkies. They're pretty much the teddy bears of the sea. Okay maybe not teddy bears, but admit it, you kind of want to cuddle one compared to their more toothy cousins. They certainly have no interest in sampling swimmer a la carte.

The Leopard Shark is the bay's most common shark. This pretty guy grows up to 5ft and munches on worms, crabs, clams, and small fish in shallow water, and uses the bay as a nursery.

Super noodly Spiny Dogfish (a.k.a. spurdog, mud shark, or piked dogfish) barely hit 4ft long and hang around in winter. They can live up to 100 years, and may be preggo the longest: 18-24 months!

10ft broadnose sevengills give birth in the bay during spring & summer. They chill out near the Golden Gate and Alcatraz, cruising along the sea floor snacking on small animals, rarely surfacing. 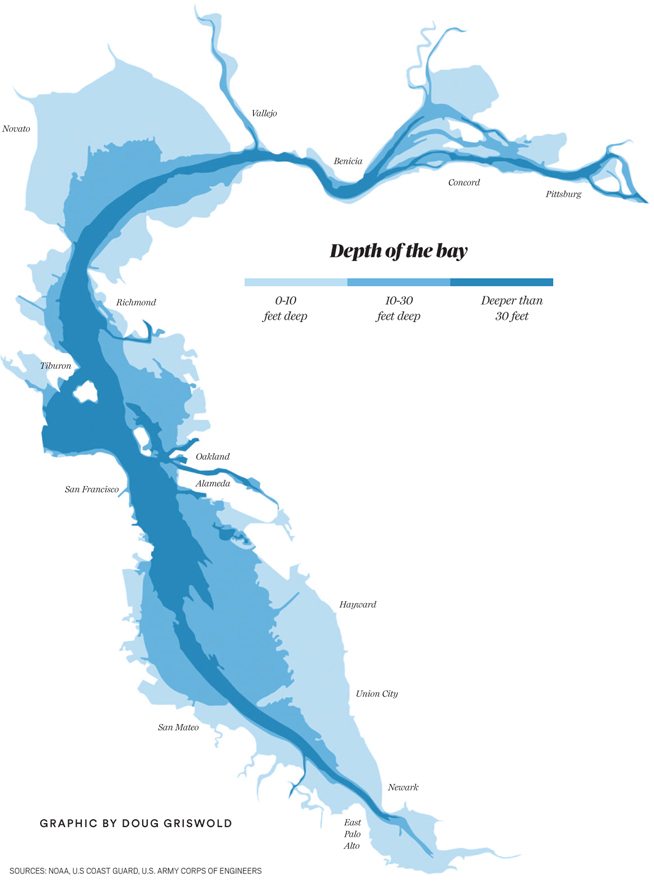 2. The bay is actually only as deep as a swimming pool.

That's right. The average depth of the bay is about 12-15 feet deep. Heck, between Hayward and San Mateo to San Jose it averages 12 to 36 inches. So much for that bridge!

With that said though, the water surrounding Alcatraz is on the deeper end of the scale, but still, it's just an average depth of 43 feet. The average depth at Aquatic Park where we swim every week? 3-6 feet (still deeper than under the San Mateo-Hayward bridge!).

Want to swim over the deepest part of the bay? Maybe you've already done it and had no idea - you'll find the deepest water in our Golden Gate Bridge race just under the bridge at over 370 feet.

3. Talk about a watery grave: Aquatic Park's calmer waters are thanks to tombstones.

By 1900, San Francisco's cemeteries had already filled to capacity. Residents fearful of disease and developers desperate for land began getting their way: fresh burials in the city became illegal in 1902 and by 1941, nearly all the cemeteries were gone and the bodies of long forgotten miners and immigrants from the city's wild west days had been moved to mass graves in a necropolis they called Colma. (Colma, as you know, still exists - and the dead outnumber the living there a thousand to one.)

Their thousands of unclaimed tombstones, however, live on.

They were put in the city's rubble pile, to be used in building projects in the growing city. Many ended up being used in breakwaters in the Marina District, as path liners at Buena Vista Park, and at Aquatic Park, where the stones can still be found at low tide during our weekly Swim With Pedro sessions. And recently, a cache of old stones was used to construct the Wave Organ near the St. Francis Yacht Club - where many family members and friends of swimmers have watched Alcatraz races to St. Francis.

4. Shag, Arch, Blossom, and Harding all lie at the bottom of the bay.

No, those aren't the old residents of the tombstones - they're rocks! The bottom of the bay has been shaped not just by nature, but by human design as well. The rocks have all been blown up - most notably Arch in 1901, because it once stuck out of the water at low tide, creating a portal through which boaters sometimes tried to slip for kicks - just not always successfully.

All are part of what is thought to be the same submerged, primordial mountain ridge, and have been demolished to about a depth of 40 feet. But they still pose challenges to big tankers coming through the bay. Big ships keep getting bigger, and are more likely to scrape along the bay's bottom. So shipping lanes have literally been carved into the sea floor like tracks for cable cars, and the excavated silt was dumped south of Alcatraz, where there used to be a pretty scary 200ft-deep hole.

The channels have had to be dredged so much to maintain them that the silt is now moved out to sea, because the hole that was south of Alcatraz is actually now a hill. 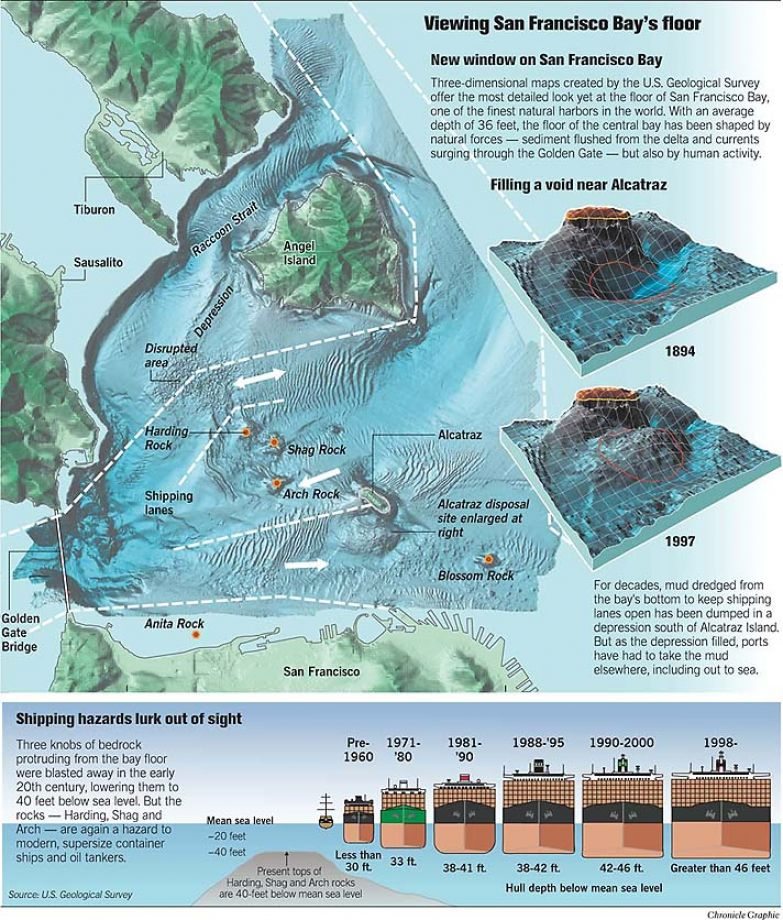 5. The City of Chester also lies at the bottom of the bay. 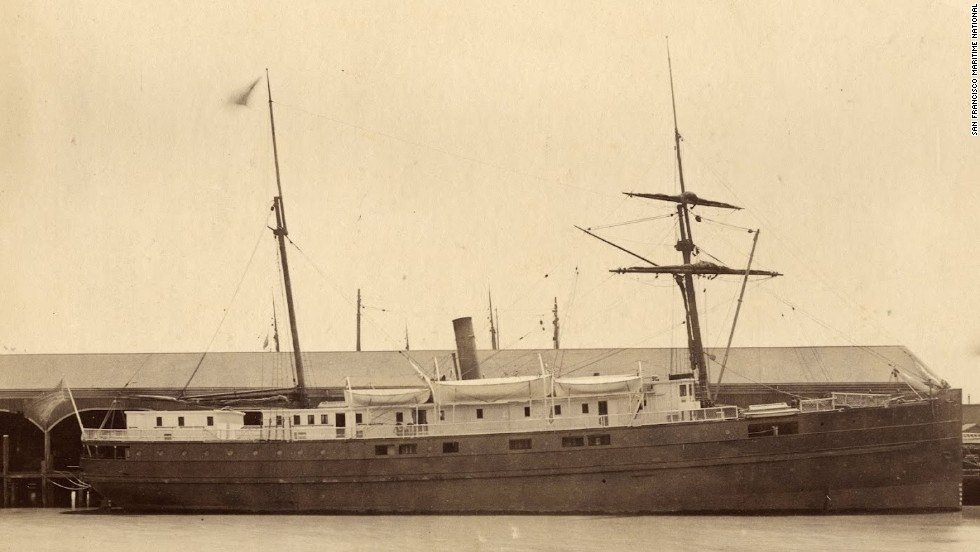 Okay... so not a city. The City of Chester was a passenger steamship that left San Francisco and collided in dense fog with the RMS Oceanic arriving from Asia. The ship was carrying 90 people to Eureka, California, on August 22, 1888, when it sank within six minutes and 16 people were killed.

Now it sits upright in the mud 216 feet under the water near the Golden Gate Bridge, so you likely swam over it during a Bridge to Bridge 10K race. It was rediscovered in 2014 while researchers were actually looking for a different shipwreck from 1952 in the same area.

There are about 200 shipwrecks in the San Francisco Bay Area, but a lot of them have been lifted out and auctioned.

6. Speaking of ships - there's a bunch buried under the Embarcadero and the Financial District.

Okay, get ready for this. During the Gold Rush, ships were ol' timey Uber, and over 500 anchored near Yerba Buena cove by summer of 1850. Whole crews not just parked but totally abandoned their ships as they head to gold country. Many ships rotted, were dismantled, or repurposed as saloons, hotels, and even jails.

By 1851, wharves extended out into the cove and buildings were even erected on piles near them. Over the next two decades, Yerba Buena Cove - and the ships in it - was filled with sand from developing downtown. The cove was eventually enclosed by a seawall, built from 1867 to 1869, and followed roughly the same path as today's Embarcadero.

So while you may not have swum over any of those... you might have walked over or taken BART through one. 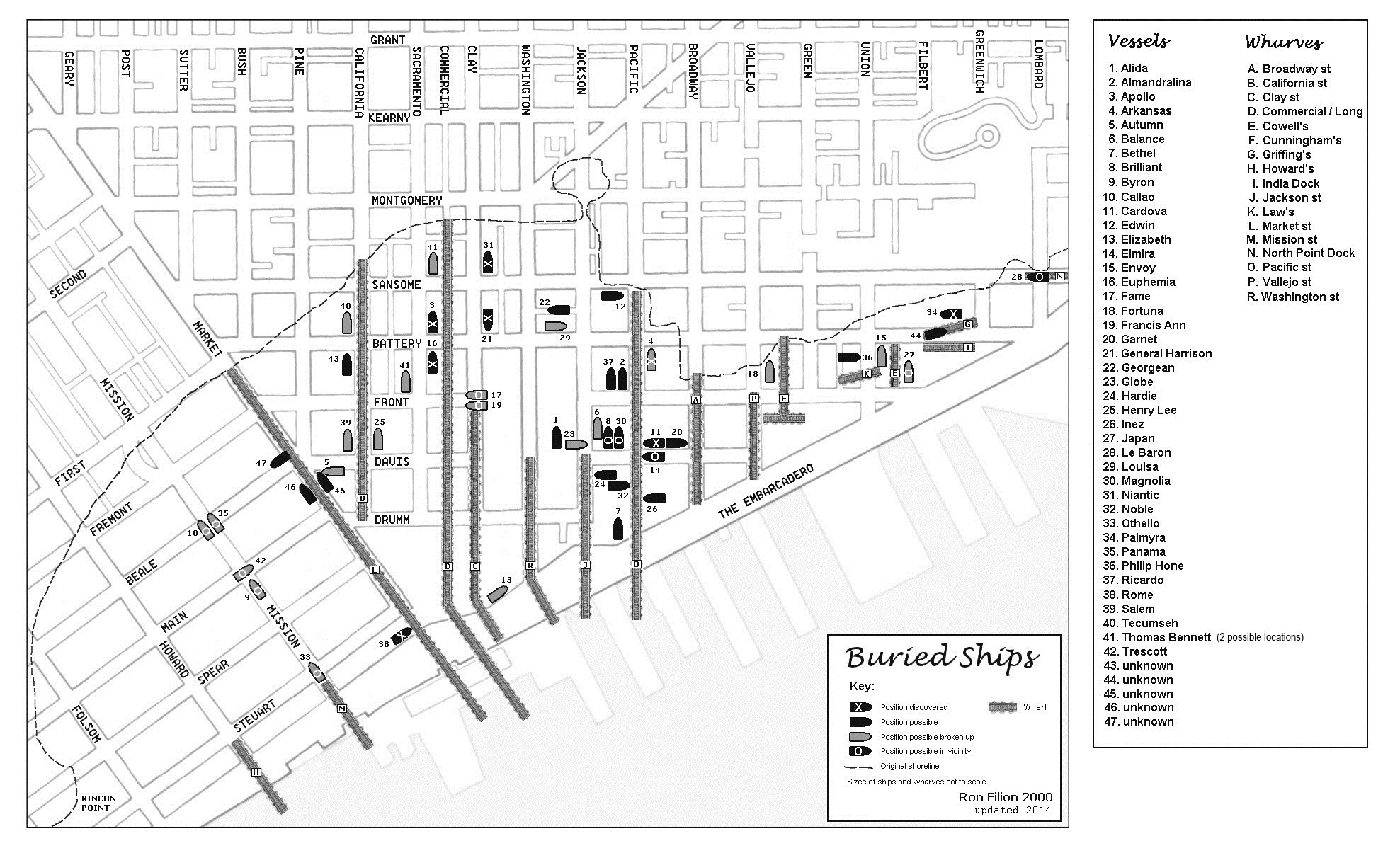 7. It may be good for shipping and swimming, but the bay is first and foremost one of California's most important ecosystems. 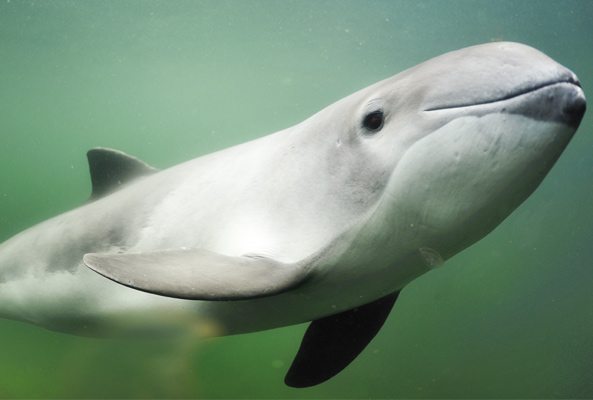 Dungeness crab, California Halibut, and Pacific Salmon rely on the bay as nurseries. The remaining salt marshes support endangered species and filter sediment and pollutants. Migratory birds use the bay as a key pit stop on their journeys. The growing health of the bay has meant the recent return of the harbor porpoise, a super cute dolphin cousin, who ditched the bay for 65 years because we trashed it. (It's so cute, please consider supporting Baykeeper, clean up the bay even more, and let's get more of these little dudes in here.)

In fact, before you made your way into the bay, it even probably made its way into you. Salt produced in the bay is shipped throughout the western US to bakeries, canneries, fisheries, cheese makers and other food industries and is used to do everything from de-icing winter highways to cleaning kidney dialysis machines.

Thanks, bay. Thank you so much.

We share the bay with small cartoon sharks and old shipwrecks, swim over shipping lanes and tombstones, drive over ship graveyards and bay salted highways. It's a pretty cool place and one we are lucky to train and race in. What are your favorite things about the bay?

Baykeeper hasn't asked us for this plug. We're doing it because of the work they do to protect the bay's health and ecosystem, and keep it a beautiful place for wildlife and swimmers alike. The San Francisco bay-delta estuary and its watershed provide drinking water for 23 million people, salt for all kinds of purposes, and serve as a cornerstone of California's monumental economy.

So yeah, it's not just an incredible race course. Donate to Baykeeper today!