Getting to Know an Olympic Champion: Q&A with WWS Member Golda Marcus

Getting to Know an Olympic Champion: Q&A with WWS Member Golda Marcus 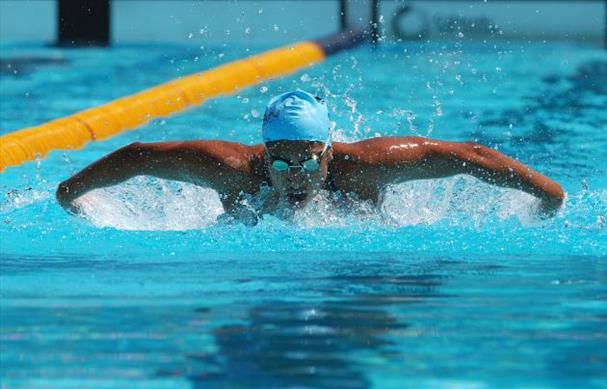 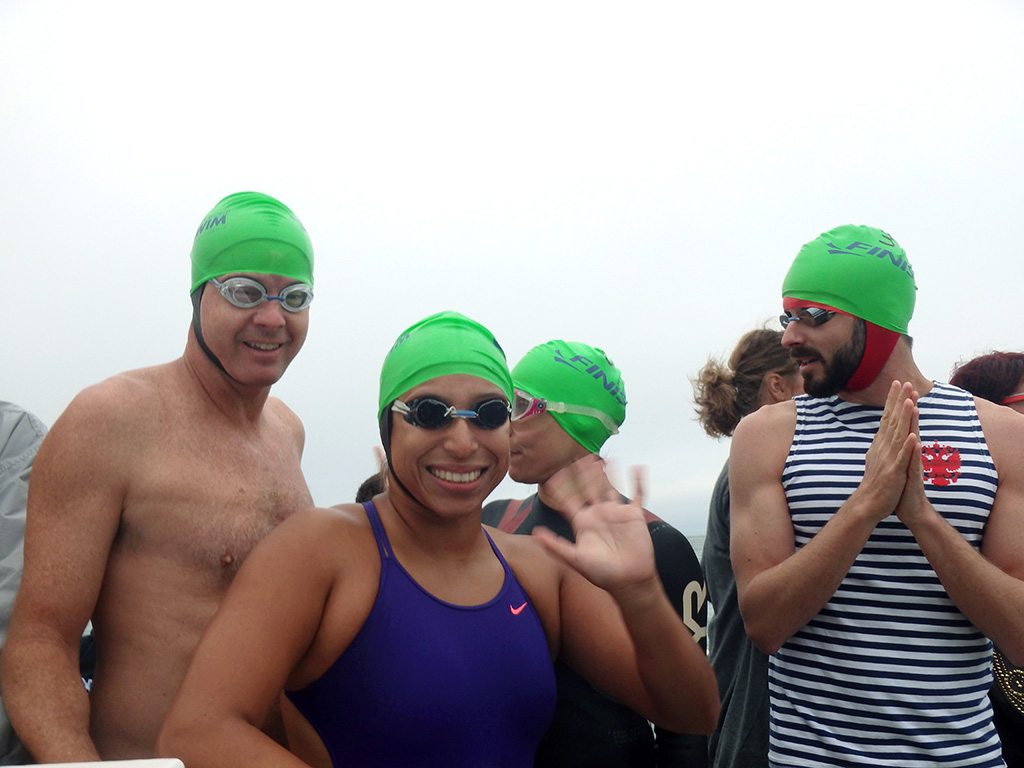 Golda gets ready to swim the Golden Gate Bridge in 2014. 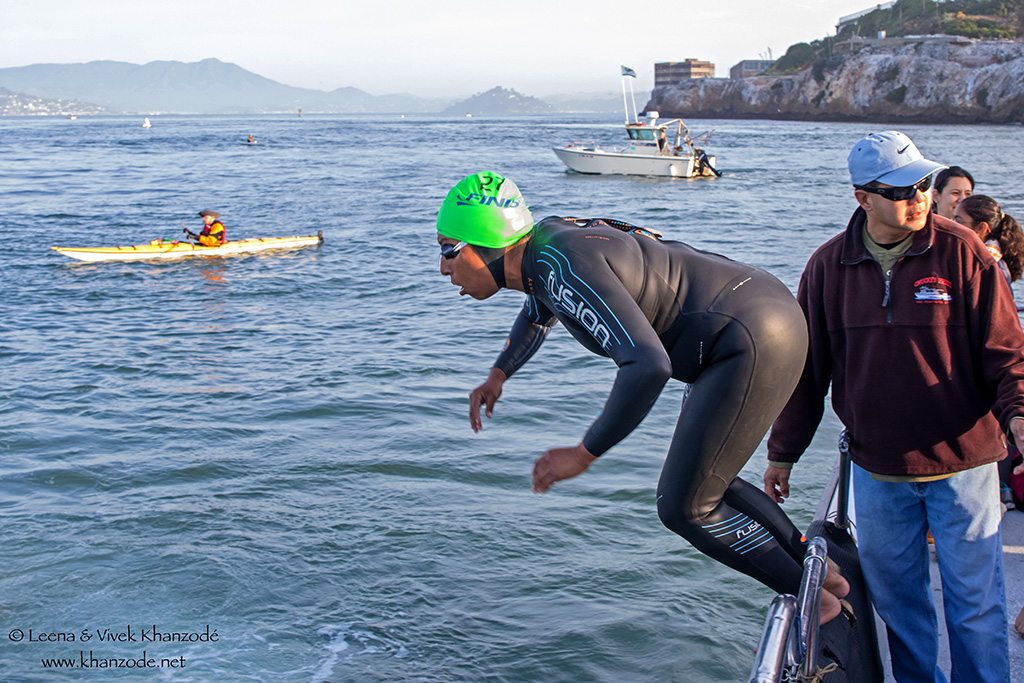 Golda takes the plunge at the 2016 Alcatraz Classic. 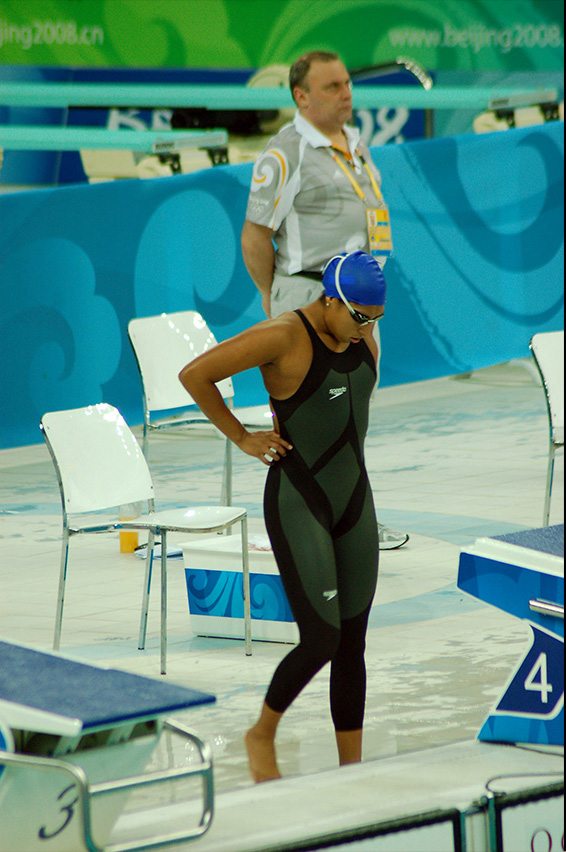 Swimming at the 2008 Beijing Olympics (above and below) 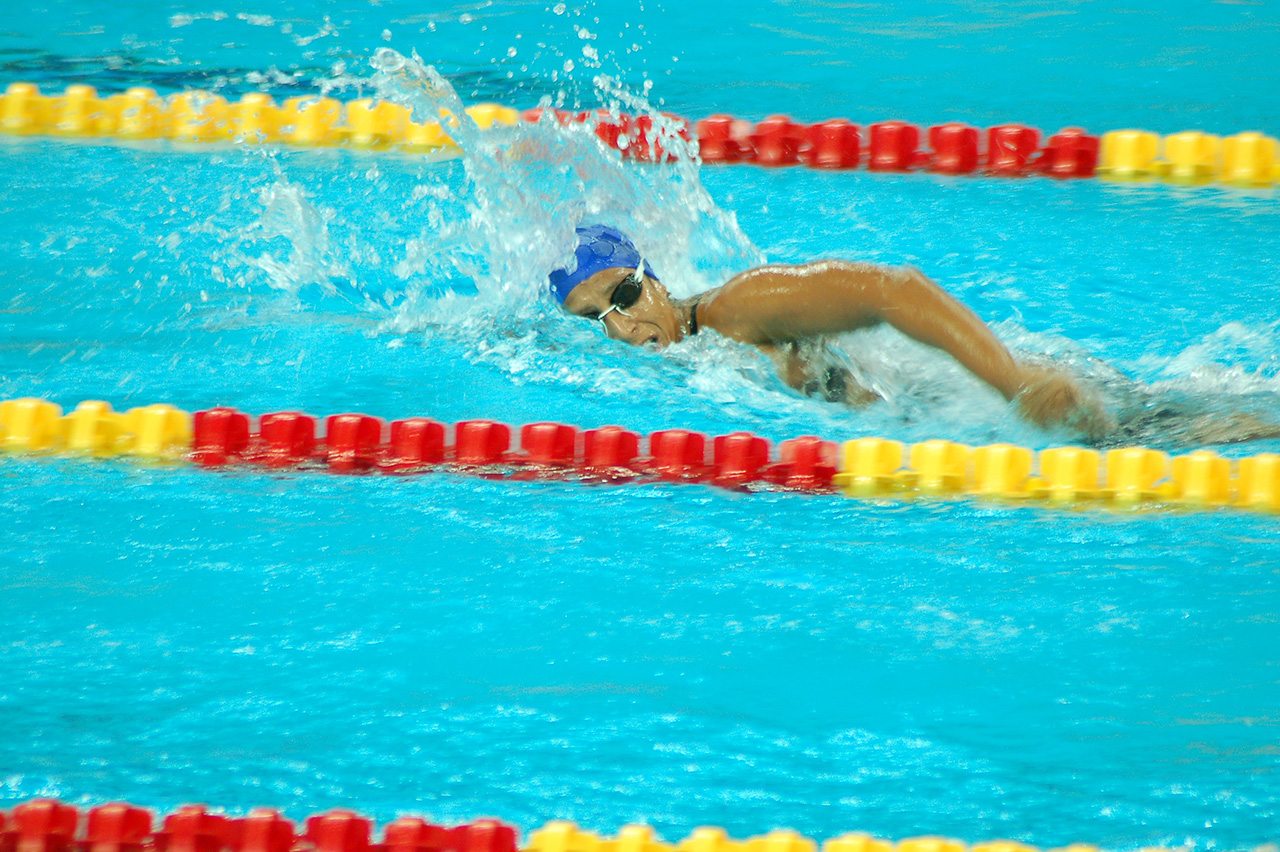 As the pool competition comes to a close and open water takes center stage at the 2016 Summer Olympic Games in Rio (women’s 10K final is Monday; men go for marathon swim medals on Tuesday), we caught up with former Olympian and Water World Swim member, Golda Marcus, who represented El Salvador in the 2004 Olympic Games in Athens, Greece and in the 2008 Olympic Games in Beijing, China. She competed in the 400m freestyle and 800m freestyle in both games. Here, Golda reflects on her experience at the Olympics, her love for the Bay, and we share more fun facts about this champion athlete.

How and when did you get started swimming?

I picked up swimming early and quickly. I grew up in Florida, where you are surrounded by water, and at 18 months old my grandmother decided for some reason to let go of me in the pool, just to see what would happen. Instead of sinking, I apparently started kicking, making forward progression towards her. My mom definitely flipped out a little when she saw this, but it made her decide to enroll me in swim lessons. By the age of two, I was swimming all four strokes.

When did you realize this was more than just something casual?

I was a gymnast and a swimmer growing up, and at one point I was a diver and a swimmer. But there was always something about the water I found extremely calming. It took all the stress from the day away. I forgot about school, my homework, exams, book reports, kids that teased me because I always smelled like chlorine. It was just me and the water; it was my happy place.

When did your Olympic dream start?

It was 1988; I was five years old. The Olympics were in Seoul, Korea. My grandfather was my number one supporter, my number one fan. He didn’t know how to swim, but he knew that I loved it, and he developed a passion for it. He called me into the living room and announced that swimming was on. I ran to him and sat in his lap. I asked, “Grandpa, who is that? The girl wearing the dark cap with the American flag on it?” He replied, “That’s Janet Evans. She’s already won gold in the 400 Individual Medley and she’s gonna win again in the 400 free.” As I watched Janet swim her 400F, taking windmill stroke after windmill stroke. I knew I was witnessing something historic, even at just five-years-old. Janet touched the wall first in a 4:03, a world record time which stood for about 20 years. I knew at that moment that’s what I wanted to do; I wanted to go to the Olympics. I asked my grandfather if it was possible I could go for my own country of El Salvador. He told me something that's been engraved in my mind since I was a child: “You have to see yourself at the Olympics. You have to see yourself achieving your goal. If you can see it and believe it, then anything is possible.” A couple weeks later, I quit gymnastics and diving. From the moment I watched Janet Evans swim on TV, I wanted to be like her.

What is your most vivid memory from the games?

Easily the opening ceremony. The process take at least a few hours and is exhausting. I smiled ear to ear when El Salvador was called (teams proceed into the arena according to the host country’s alphabet). The culmination of my childhood dream--not just once, but twice--sometimes I still can’t believe it happened. To have the honor to hear your country announced to the world and to wear your country’s colors and your country’s crest for all to see is not something you can put it into words.

Finish this sentence: The most unexpected thing for me at the Games was…

Tearing my right shoulder in Beijing. I had already torn my shoulder at this point twice prior to arriving in China. I did not expect to tear it a third time. During a practice session, I felt some discomfort and went to go see a doctor for a possible massage. I ended up receiving a deep tissue massage of sorts, but during one of the stretches, he accidentally stretched my arm too much, causing my shoulder to pop. I felt this immense pain and burning sensation running through my shoulder and right pectoral. The pain was so intense, I remember seeing stars. But like the athlete that I was I had to go on. I rested that afternoon and dove into my final workout the following morning, with no pain, but an extremely weak right shoulder.

When did you transition to open water swimming?

At age 11 I finished 2nd in an ocean mile in Ft. Lauderdale. At age 24, I was 2nd in the Hurricane Man 2.4 mile swim in the Gulf of Mexico. But my real transition came when I was 27 when I moved to California. I had told my mom prior to moving out here that maybe one day I’d escape Alcatraz. She was shocked when I told her that I decided to sign up for one--she never thought I would get in the cold water! On July 28, 2012, three years after my injury, I learned to acclimate to the cold waters of San Francisco and completed my first Alcatraz. I ended up finishing 5th overall, second in my age group.

Are you training for any upcoming events? Which ones?

In 2016, I will compete in the 2.4mi Catfish Open Water Swim in Del Valle Reservoir and maybe the Alcatraz Touch and Go. I have a bunch of races I hope to knock off in 2017: Winter Alcatraz, Alcatraz Classic, Sierra Open Water Series in Tahoe, Bridge to Bridge, and Swim Around the Rock. But my two main goals that I have for myself are to swim Bay to Breakers (10 miles) and to swim a half-marathon (13.1 miles).

What is your favorite swim in the San Francisco Bay?

Easily Bridge to Bridge. You don’t get a better view of the San Francisco than that. You get this awe-inspiring view under the Golden Gate, a beautiful look at Alcatraz, and the ability to take in the entire western span of the Bay Bridge at the finish. You're literally right in the middle of everything. I tell people that if they want an amazing view of San Francisco, then they need to swim in the bay, because it doesn’t get any better than that. It’s a complete tour of the city from the water, and a vantage point so few ever get to see.

What is your pre- and post- open water swim routine?

I make sure the night before to eat a balanced amount of carbs and protein. The morning of I’ll eat a bowl of oatmeal, mix it with some sunflower seed butter and add some blueberries. I realized since carbohydrates burn slower, my body will be able to stay warmer in the cold water. I’ll take a product called Rehydrate by Advocare and mix it with water. I love it because it's something I can have before, during or even after a swim. I also take Gu about 20 minutes prior to entering the bay.

After a swim I’ll eat...a lot. I’ll start with a Macro bar consisting of just sunflower seed butter and chocolate. There’s enough protein in that bar to help fill my stomach. I’ll also either snack on an apple or banana and to drink I’ll have some chocolate coconut milk or TruMoo to help reduce the lactic acid.

What advice do you give to adults looking to start swimming? What do you tell the kids you coach about having Olympic dreams?

I teach adult swim lessons at our swim school, and I’ve had the experience of teaching adults at a wide-range of familiarity with the water-- from those that aren’t afraid to adults to the ones that are terrified to dip their toe in the water. But regardless, it’s never too late to learn. Swimming isn’t easy. In fact it is one of the hardest sports to do, so to simply enter the water and sit on the stairs, or even stand up in the pool is a HUGE step to conquering their fear.

Some of the younger swimmers I coach barely know who Michael Phelps is and what he’s accomplished (some weren’t even alive when he competed in his first Olympics!) Some want to replicate exactly what they see in these high-caliber swimmers and I have to remind them that just because Olympians do it, it doesn't make it right. They have goals of achieving their first “A” time, JO cut, Far Western cut, etc. I want them to have big goals, as it is a great and wonderful thing, but they have to learn to crawl before they can walk. Every single race they swim, I remind them it’s a different race and that every time they are a different swimmer; they are never the same swimmer twice. I tell them to have the best dive they can, the best technique they can and be the best swimmer they can possibly be because every day is different. If they look at the clock and see their time and they know they could not swim any faster, then it was a good race, regardless of place. I tell them to never aim for perfection because nobody is perfect and that they should aim to be the best swimmer they can be that day. If they do that every practice and every competition, then they will be not just a successful swimmer/athlete, but successful in life.

What is your favorite…

Food?  Any type of Asian food.

Spirit animal?  I took a quiz on facebook once and it told me my spirit animal was a dolphin, so I’m going with that.

Catch phrase/motivational saying?  Always remember to chase your dreams and reach for the stars.

Cause/Charity?  My grandfather passed away from Parkinson’s Disease. I hope we can find a cure for this disease that takes the lives of so many.

Training for an Alcatraz Swim: Step by Step with Coach Angela