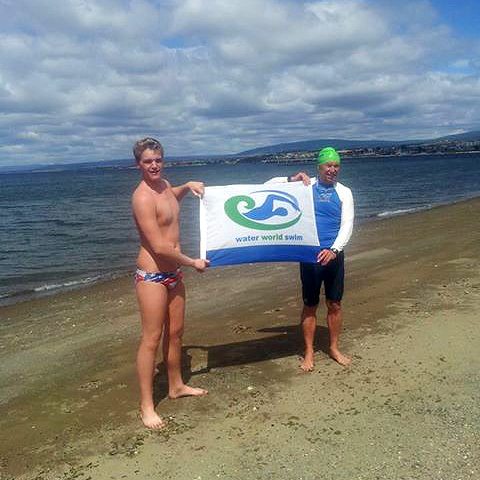 Hunter training on January 16th, in water at 39 degrees Fahrenheit 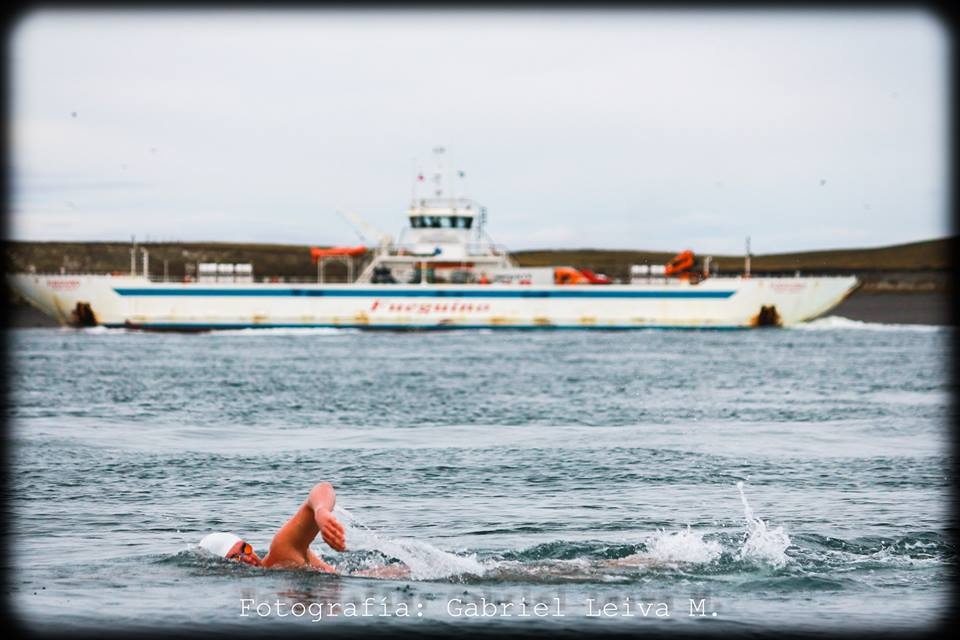 Top images: Pedro Ordenes guiding Hunter's Swim; Hunter swimming in the Strait; Hunter arriving to base; Hunter with a bevy of adoring fans. Images from Pedro Ordenes and Levy Gerzberg.

17-year-old Hunter Wright from Redding, California crossed the Strait of Magellan this morning  January 17th, 2014 with great success and extraordinary perseverance. Conditions were moderate as he began his swim at 7:42am with air temperature at 41 degrees Fahrenheit and water at 42.1 degrees. He began the swim with currents at 12 knots from west to east, but the slack expected around 8:40am did not occur.

As a result, Hunter was pushed east, forcing him over the borderlines. It took all his strength at 70 strokes a minute to bring him to the middle of the Strait. As he reached the center,  the currents unfortunately started to change to form whirlpools in the currents he was already swimming against.

WWS Coach and Founder Pedro Ordenes, Chilean native and oldest person to cross the Strait, says “Hunter was to be admired by the crew of the boat with the support team as he kept a very steady pace during the whole crossing. The weather kept changing for the worse, as winds of over 12 knots reaching 14 knots made their presence. Hunter then started to look fatigued but not changing his pace. He made turns to swim backstroke, which made us to start worry as he started to get water on his face to cover him completely at times.”

Twice during the crossing, currents unexpectedly came from different directions which forced Hunter to double his efforts in trying to reach the closest point on Tierra del Fuego. Support called out to him several times to see if he was responding as his face and back were turning blue. – but he consistently responded with a firm no each time. Towards the end, conditions completely deteriorated as winds went over 16 knots and he was pushed into a whirlpool with waves at 4-5 feet and currents over 14 knots.

But he finished in 1 hour 52 minutes – not beating the time record as hoped, but facing incredible challenges in frigid and wild waters, and making the record for youngest swimmer to ever successfully cross the Strait.

Pedro says, “Believe it or not, when Hunter touched land and raised his arms and fell back in the water, even the paramedic share a tear with all of us.... he said, so young and so brave. As his coach I felt so proud for him and for all of us at Water World Swim. I think we have the best waters in the world to train, in the bay of [San Francisco]... Everyone cheered and Navy officers at the Station commented of his age, admiring him for his tenacity and strong will. Everyone cheered a Viva Chile and they made us company with a U.S.A. U.S.A.!”

They are now on their way to Restaurant Jekus to have Hunter sign the wall of fame of those that have crossed the Straits of Magellan – proudly as a non wetsuit, recorded for history. Pedro adds, “Hunter dedicated this swim to our Heroine Lynne Cox and his best friend who passed away Thursday, Andrew Jones, R.I.P."

Thanks go to Pete from Mack's Earplugs, Hotel Rey Don Felipe, Jekus Restaurant in Punta Arenas, the Levy Gerzberg foundation, the Chilean Navy, and to the many supporting this challenge.
chile, ColdWater, individual swims, record breaking, strait of magellan
Share